A Brief History of Fireworks 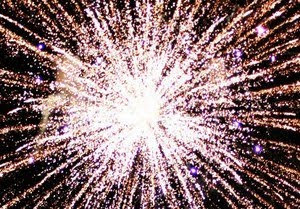 Well since we just celebrated Independence Day a week ago I thought I would tell you the history of the one item that we use every year to celebrate the birth of our country. I'm talking about fireworks. They are mostly associated with the 4th of July but have been used to celebrate other events.
Their earliest known appearance in history is 7th century China.They used them in hopes that their loud sounds would frighten away evil spirits. Little children were told that it scared away monsters.
Eventually the art of making fireworks became a respected profession in China. It was always a celebration only for the wealthy or royalty until around the 14th century when they started to use them for the common people for things like weddings, births, business openings, etc.
The first Independence day celebration in 1777 was with fireworks while we were still at war and didn't know if our young country would survive.
Over the years in the USA many states outlawed the use of fireworks by private citizens due to concerns for peoples safety. You needed to be a licensed professional to use them. Lately some states are starting to make use of fireworks legal once again in their states.

Two of the largest fireworks displays in the country happen in Kentucky and Ohio. In Louisville, Kentucky they have the largest display at Thunder Over Louisville to celebrate the opening of the Kentucky Derby Festival.

In Cincinnati, Ohio radio station WEBN sponsers another large fireworks display every Labor Day Weekend. It is one of the largest in the country and broadcast on TV station WXIX. They first did in in 1977 as a one time event to celebrate the radio station's 10th anniversary. It was so well received they have done it every year since. Each year it draws over 500,000 people. Some arrive in houseboats a week early and live there floating on the Ohio river just to see the event.
That's all till next week, this is Cap signing off.
.