Hi! Captain America here and I want to thank you for coming by my new blog. I hope to have a post here at least once a week talking about somethings that deal with the history of this great nation that many of us call home. Today is Memorial Day and I can't think of a better day to start this blog.
Memorial Day marks the start of summer and many peoples vacation season. It was started in the eary 20th century to remember the patriots who gave their lives on both sides of the Civil War. In later years it became a way to rememeber others who passed on. From others who gave their lives for our country to family members whom we lovingly remember.
At first it wasn't even called Memorial Day. It began as Decoration Day. It was in 1865 when the North started decorating the graves of fallen soliders. The first known observance of the soon to be holiday was in Warterloo, New York. General John Logan brought it to nationwide attention. General Logan was the Commander-in-Chief of the Grand Army of the Republic. He issued a proclamation that Decoration Day be observed across the nation. The date of May 30th was chosen as it was not the anniversary of any battle.
After that the name slowly changed to Memorial Day. It was first called that in 1882 but it wasn't officially changed till 1967. The next year, 1968, Congress moved it's date to the last Monday of May to give everyone a 3 day weekend. However that law didn't go into effect till 1971.
Part of the celebration seems to have always been family outings and local parades. The oldest known continuously running  Memorial Day parade is held in Ironton, Ohio. They have had a parade there every year since 1869. The first parade was in 1868. 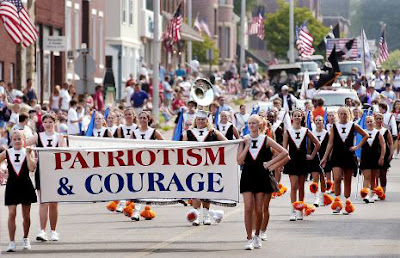 Some fear that people are starting to forget the rememberances of those that have gone on before us in favor of the parades and picnics. You only have to drive by a local cementary to see all the flowers and american flags on the graves to know that Memorial Day weekend means alot to each citizen of this country. Have a safe and meaningful Memorial Day.
Posted by Rick L. Phillips at 12:01 AM