June 6th The Drive In Theatre

I know that today is the anniversary of D-Day but I thought that we should celebrate something more enjoyable. On this day in American history, June 6th 1933, Richard Hollingshead opened the first drive-in theatre on Crescent Boulevard in Camden,NJ. His mother struggled to sit in comfort in normal theaters and he got the idea for an outdoor theatre where people could sit in comfort in their own car. He experimented with his own car in his own yard by stringing a sheet between two trees, a speaker behind the sheet and mounting a 1928 Kodak projector on the hood of his car. After he perfected it he got a patent for it in May of 1933. Less then a month later he opened Park-In Theaters, Inc. He charged 25 cents per car and 25 cents per person. His idea caught on. 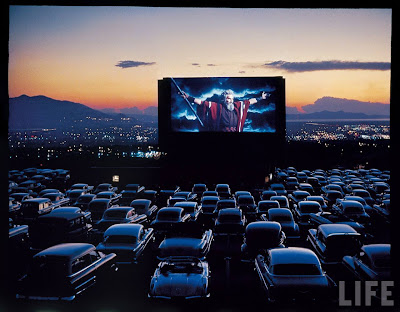 By 1949 they were called Drive-In's and were popping up all over the country. Mostly they showed B movies but it was still a cheap family outing or date. The most popular time for them was from the 1950's to the mid 1960's. By the 1970's the economy was getting worse. Growth of the industry slowed as land was getting expensive and Drive In's needed large lots of land to have enough room for all cars to view the screen. By the 1980's with increased competition from Cable TV and home videos the end was near for Drive-In's. Many of them closed up. At the height of its popularity there were over 5,000 in the USA. Now there is barely 500. There was a brief period of interest in the Drive-in theatre in early 21st century with some old drive-in's getting more business or groups of people gather to show movies on the sides of buildings with people viewing from parking lots or side yards. It still continues to this day but so far hasn't gained enough strength to revive the industry.
The Drive-in became an American icon. For decades not a summer went by without a family or teenagers paying a visit to their local Drive-in.
Below is a screen capture of the Dixie Gardens Drive-In after it fell into disrepair. It was later tore down and replaced by office buildings.