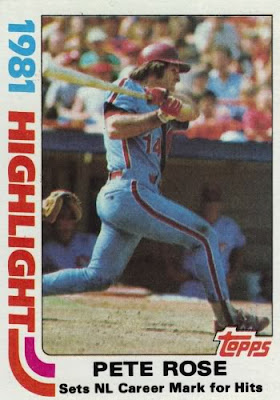 Tomorrow is a date in Baseball History. On August 10th 1981 Pete Rose broke the National League Hits record. It was set previously by Stan Musial. Rose, whose long baseball career was mostly with the Cincinnati Reds, was on the Philadelphia Phillies at this point in his career. He was in the middle of a 15 game hitting streak when the season was interupted by a long baseball strike. Unlike other strikes this one was mostly supporeted by the baseball fans. It was believed that the team owners were trying to get control back from the players contracts. After 7 weeks the strike was over. On August 10th the Phillies played the St. Louis Cardinals, the team that Musial spent most of his career with. The crowd had to wait quite a while for that hit as Rose didn't get it till the 8th inning. As Rose got to first base the crowd gave him a standing ovation. Stan Musial himself came out of the stands and congratulated Rose at first base. Oddly enough it was in 1963 when Stan Musial got his last two record setting hits against the Cincinnati Reds. The Reds second baseman was rookie ballplayer Pete Rose.