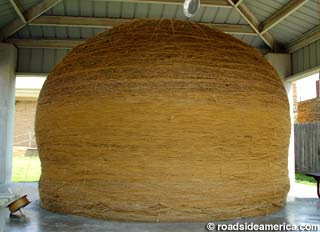 What is a family summer road trip without seeing the world’s largest ball of twine? I personally haven’t but many people have. So many that it is a pop culture joke. It has appeared or been mentioned in many movies, TV shows and videos over the decades. From National Lampoon’s Vacation to the current TV show Supernatural. Actually Vacation mentions the world’s second largest ball of twine but you get what I mean. But which one are they talking about. You see there is more than one that claims to be the world’s largest. One is in Darwin, Minnesota. Francis Johnson started his in 1950 and worked on it four hours a day for 23 weeks. It is 12 feet in diameter and weighs 10,400 pounds.
Another is in Cawker City, Kansas and is shown above. Frank Stoeber wanted to beat Johnson’s ball and his eventually was at 11 feet in diameter when he died in 1974. It is housed in an open air building and the town holds a twine a thon every year to add to the ball. In 2006 the ball weighed 17,886 pounds and was 40 feet in circumference.
In Lake Nebagamon, Wisconsin James Fran Kotera started his ball of twine in 1979 and still working on it. He says his weighs 19,336 pounds and that at least makes it the world’s heaviest ball of twine. It is housed on JFK’s front lawn and he is working on a ball of string that he calls Junior.
The one in Brooks, Missouri has the best claim to the title as it has been certified by the Guinness Book of World Records. It was said that it was started by Texas millionaire J.C. Payne and is now owned by Ripley’s Believe it or not. Payne said he used a system of pulleys to build the ball himself in four years. It is 41 and a half feet in circumference.

That's it for this week. Hope to see you again next Monday.
Posted by Rick L. Phillips at 12:01 AM