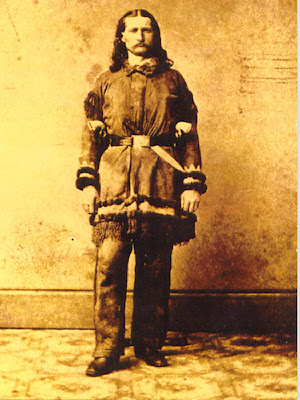 On this day in American history the legend of the Dead Man's Hand began. It's story is just as amazing as the man who held the original hand.
"Wild Bill" Hickok, one of the greatest gunfighters of the American West, was born inIllinois in 1837. His real name was James Butler Hickok. He first became famous as a gunfighter in 1861 when he shot three men who were trying to kill him. It was reported in Harper's New Monthly Magazine and gave rise to his fame. Soon other books and articles followed. While many of them were exaggerated, his reputation was rightfully earned in some impressive gunfights. 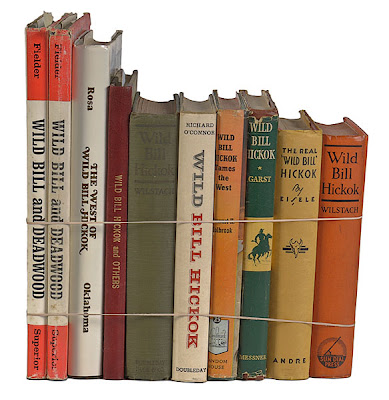 It was in 1871 that he gave up gunfighting when he accidentally killed his own deputy in a gunfight in Abilene, Texas. After that he lived off his reputation. He first joined Buffalo Bill Cody's Wild West Show where he starred as himself. At times he rented himself out as a guide to wealthy hunters. His eyesight began to fial him and he wandered the West as a gambler. At times his money was so low that he was arrested for being a vagrent. His reputation wasn't helping him that much anymore.
At the age of 39 he found himself in Deadwood, South Dakota. He made a small living as a gambler at  the local saloon. On August 2nd 1876 he was playing cards at the saloon that afternoon He made the mistake that any gambler/gunfighter should never make. He had his back to the saloon door. In walked a guslinger named Jack McCall. He walked up behind Hickok and shot him in the back of the head. He died instantly. McCall tried to shoot others in the saloon but his other bullets wouldn't fire. He was arrested, tried, convicted and hung for murder. The greatest gunfighter the west ever new was murdered in a cowardly way. Shot in the back. Never getting a chance to even take his gun out of his holster or see his killer.
Since then the legend was told that hand Hickok held when he was playing his last game of cards was a pair of black aces and black eights when he died, a combination that has since been known as the Dead Man's Hand.
Posted by Rick L. Phillips at 12:01 AM